Neville Falconer walked the Milford Track before lockdown in March with his guide dog Sophie – he tells us about his intrepid experience which includes a helicopter evacuation: 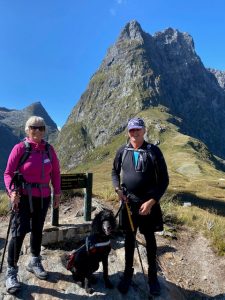 In August 2019, my wife, Jenny and I were visiting with my sister and her husband when they told us they had booked to walk Milford Track. That started us thinking we might join them. We wanted to do it but needed to find out more so I contacted Ultimate Hikes who were very helpful in explaining the rugged nature of the walk and the need for reasonable fitness. I also contacted the Department of Conservation at Te Anau to ensure they were okay with guide dog Sophie in the Park. We got a warm welcome; they hadn’t seemed to have many Guide Dog handler requests before. We decided to go ahead, mainly because of the challenge and of what we had heard about Fiordland as a Global Heritage wilderness area, accessible and able to cater for a VIP (Vision Impaired Person).

The booking was for March 2020, so we had about six months to gear up and improve our fitness. As with most guide dog handlers, we already walk quite a lot so our preparation mainly consisted of walking longer routes and over a variety of surfaces, getting as much stony gravel as we could. We visited Sophie’s vet and discussed our plans. She was also very supportive and confident in Sophie’s ability to handle it. The vet gave us preparation advice and a first aid kit specifically for Sophie to take along. We didn’t go hard out on the exercise, doing a mix of 6-12km walks each week routinely, but by the time March came around, we felt sufficiently prepared.

Our group met in Queenstown for a briefing the night before setting out. Noting that there had been a major weather event in February, we knew that the track was a bit more challenging and rugged than usual. For example, there had been some bridge washouts that still needed repairing.

The first day involved a coach from Queenstown to Te Anau, a boat trip across the lake and then an hour walk from the landing to Glade Lodge for the night. This was really easy, a nice formed track and not steep at all. For orientation, we went on a “Nature Walk” which was a couple of hours round trip to a small waterfall but traversing some quite rough ground with lots of exposed tree roots to negotiate. Sophie was amazing how she would step through gaps or jump over roots across the track as the case may be.

We set out at 7:30 am for a 9-mile tramp to Pomperlona Lodge. The track was reasonably easy going, albeit climbing all the way. The weather was wet as wet, but this is Fiordland so no surprises. Sophie was happy as decked out in her Swanndri and raincoat. Initially, we had quite a difficult rocky river bed to drop down into and up the other side to make the main track. But once through this, we made good progress along a rocky but reasonably formed track. The sounds of birdlife were amazing. There were Kea, Kākā, Bellbirds, South Island Robins and the rare Blue Ducks. Sophie took a close interest in the many Weka, and they seemed just as interested in her. The waterfalls were also amazing. They start running within a day or so of the rainfall and stop again just as quickly. All around is the sound of rushing water, and you feel the mist in the air. Toward the end of the tramp, we had to get over another difficult and rocky river crossing which involved quite a climb for us all. Some of the rocks were bigger than Sophie, but she jumped up and over as if it were nothing. She is such a trooper.

Pass Day, was a bluebird day with no wind. We climbed up 750m altitude in 9km to the top of McKinnon Pass then down 850m in 5km to reach Quentin Lodge. An ascent zigzagging up a steep and rocky mountainside followed by an even steeper descent through more rocky and washed out former tracks. I had to be really careful to locate and plant each footstep because there were only rocks to stand on. The heavy rainfall of February had washed away most of the gravel track walking surfaces. Day three was a very tough day, but with the amazing help of Jenny and the Ultimate Hikes guides we made it through.

We went from Quentin Lodge and intended to go to Sandfly Point. A fairly easy tramp of about 21km then a boat over to Milford Sound Village. Toward the end of this tramp, we needed to get through a river ford. There had been a significant bridge washout that hadn’t been repaired yet, and the risk was that with rainfall, the river could soon rise to chest deep and become impassable. We set out at about 8:30am with the prospect of rain looking a bit ominous, and made the first hut for morning tea at 11am. All along the way, the guides had been liaising closely by radio with head office, discussing the weather and the potential need for a helicopter evacuation. Eventually, we decided to set out and push for Sandfly Point however after about a half-hour the rain really came in, so we turned back to the hut. The noise of the helicopter broke the serene wilderness sounds, but by then it was a welcome arrival, and we were glad to be warm and dry at Milford Sound Lodge.

The final day involved a pleasant boat trip around Milford Sound then back to Queenstown by coach to arrive late afternoon. It was an experience we will never forget. Sophie was truly amazing and demonstrated the bond and commitment handlers and guide dogs develop with each other. On the occasions where the going was too narrow for Sophie to harness guide safely, Jenny would take her ahead on a leash while the guide brought me through. During these times, Sophie wouldn’t go far without stopping to look back and wait until she was satisfied that I wasn’t far away.

My thanks go to Jenny and the Ultimate Hikes guides for helping me through. I’m really glad to have done it, both for my satisfaction but also for the hope that this might be of some encouragement to others with disabilities to have a go at their own challenges and aspirations. For sure, it is crucial to accurately assess the risks and prepare well, but the sense of achievement will stay with you as a basis for encouragement when tougher times come. I’ve got a small but rugged piece of Quartz Granite that the guide gave me at the top of McKinnon Pass. It sits on my desk so that when those tougher days come, I can pick it up and remind myself that I can get through it.