Blind Low Vision NZ was founded on 9 July 1890., To celebrate this our  130th birthday  we talk to Jackson Paraha, Nola Burgess and Shaun Johnson about their experience with our community, and how life has changed living with blindness and low vision over the years.

Did you know? Our name evolves with the times.

We have had seven name changes since we were founded in 1890. 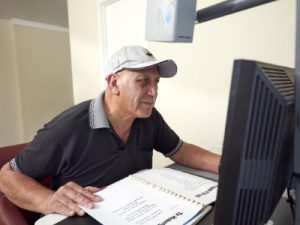 With the rollout of our new brand Blind Low Vision NZ, Jackson Paraha, supported us in a photography project. His motivations were to raise awareness of our services for Māori and anyone who needs our support.

Tell us about how you first became engaged with Blind Low Vision NZ?

It was at primary school in Kaitaia that my eye condition was picked up. I wasn’t aware that I had a problem, I thought that I could see properly, I assumed I was like everyone else – but I was struggling through school. I moved from Kaitaia to Auckland to go to the Homai School for the Blind (now known as BLENNZ) which was a big change for a young Māori boy.

Homai was awesome. I met so many new people and made so many mates from different tribal areas. There was a really strong focus on whanau. When I went from Homai to Manurewa High School I was the first low vision member of the Kapa Haka group. I really needed that support as a young Māori – it strengthened me and gave me the desire to learn more about who I was and where I was from – it was the start of my education and how I became who I am today.

What is it like living with blindness now compared to when you were younger?

Well Blind Low Vision NZ is still supporting me today in my current role as a kaiako in Kohanga Reo (teaching Māori language and values to preschool children). They are helping me with training and getting the right software to continue to do a great job in my role.

What are you hopes for the future for young blind people in today’s society?

I recently met a young Māori boy – about 18, who reminded me very much of myself when I was his age. He is really bright but doesn’t know where to get advice or support in terms of employment or what to do next – there seems to be a gap from transitioning from school to getting a job. I have two daughters of my own who have low vision and wish there was more support out there to help young people to access the services they need and to show them the options that are available to them.

Recently you took part in our brand photography project – the purpose of which was to let people know that we are here for everyone in New Zealand. Why did you agree to be involved and why is it important to you?

It was really important that other young Māori or anyone who needs support to make a better life for themselves know where to go.  I have to be honest for a long time I wanted to be somebody I wasn’t, someone with full sight. I have accepted my blindness now but it’s taken a while. For me from a Māori perspective I may not have my vision but I have my reo.

So now, nothing is more important to me than having some input in a child’s growth in Te Reo. I want to give back to my community and especially the young ones. So I am happy to support Blind Low Vision NZ get the message out to not only Māori but everyone who needs the services. 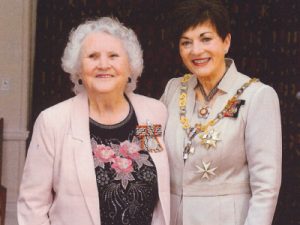 Awarded a Queen’s Service Medal in 2018 for services to the blind and low vision community, Nola’s journey with Blind Low Vision NZ began when she became a client at aged 21. She went on to become the Chairperson of the Gisborne Advisory Committee (now known as Community Committee) and paved the way for a local Gisborne office and community centre of Blind Low Vision NZ to open in 1991.

Tell us about your early years with Blind Low Vision NZ.

I’ve been a member since 1956. A social worker (now known as a service provider at Blind Low Vision NZ) used to visit twice a year. I remember they gave us a free walking stick (it wasn’t called a white cane back then), a free radio licence and a free braille watch.

The talking book machine was a great big gramophone and played huge records – you could only listen to one book at a time because you needed several records per book. When it changed to cassettes, it was an absolute lifesaver.

I got my first guide dog in 1982 and I have had four – it has meant that I have been able to hold down a job and get on with things. I have been on the Community Committee (formerly the Advisory Committee) for 39 years, at one stage I was the Chairwoman. We wanted a space where we could socialise and meet up so I suggested we ask for a Gisborne centre. People thought it would never happen, but in 1991 we celebrated the opening. I remember a member saying ‘now I feel like I belong’ and that’s what it’s all about.

You’ve done a lot to support the community over the years – what drives you to give back?

I believe that when you lose your sight, you don’t worry about what you can’t do, you get on with what you can. People say that I am an inspiration, but that’s not my aim, I just get on with life and encourage others to do the same.

Have you experienced a change in attitude over the years towards people who are blind or have low vision?

Certainly – there is a lot more things available for people, a lot more technology and equipment so that you can gain employment, study, travel or do whatever you choose to do. Once upon a time blind people made baskets and that was it. I envy, but am happy for, the young people growing up today because they have many opportunities that I never had.

What are your hopes for the future?

I would like to see people who are blind or have low vision carry on a normal life, as normal as they can. I want people to understand that blindness affects people from all walks of life – you can’t put us in a box. We’re just normal people only our vision is impaired. We have feelings just as everyone else – we laugh and cry just like everyone else. 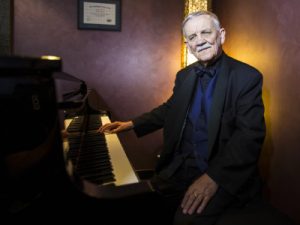 It is likely you can find Shaun Johnson, of Wellington, at the James Cook Hotel. He has held a residency there for an incredible 39 years playing the piano. He first learnt to play at the New Zealand Institute for the Blind where he lived for 11 years.

Tell us a bit about living at the New Zealand Institute for the Blind in the 1950s?

I was a boarder at Nathan House and went to school at the Institute. I started in 1950 when I was six years old. There were about 24 boys there and the boys and girls were separated. We slept there, we ate there and we went to school there. As well as normal classes, there were also special classes where we learnt a hobby.

What were the advantages of living there and the disadvantages?

I didn’t see much of my parents in my first year until they moved up to Auckland from Dunedin, but it was where I learnt piano.

Music classes were compulsory and if you were good at it then you carried on. I was also a member of the brass band. Two people who got me up to scratch to study music at university were teachers May Bray and Lillian Martin.

Have you experienced a change in attitude to people who are blind or have low vision over the years?

I think now there is more of an acceptance in society and there is a lot more that a person who is blind or has low vision can do.

What are your hopes for the future for people who are blind or have low vision?

If they try and do something there is every chance that they will succeed – there is technology out there that means there are so many possibilities now.