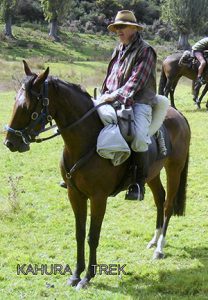 Dick Lancaster, who is totally blind, says riding his horse Chumley is not that different to having a guide dog for him.

The Taumarunui resident puts a great deal of trust in his horse to enable him get him safely to his destination, but he says he has no problem.

He belongs to trekking group the Taumarunui Intrepid Trekkers where he and his mates enjoy the backcountry on horseback.

“My horse can see and he usually follows the horse in front, or the track if we’re in front.

“It’s more of a problem when I get off my horse – that’s when a sighted guide from my wife Jenny or a mate’s elbow is required.”

His eye condition Achromatopsia started 25 years ago. Five years after he was diagnosed, he and his wife Jenny got into trekking as they thought it was a great recreation activity for someone with low vision.

He has continued trekking even though he is now totally blind.

“Trekking gives me freedom and independence within the safety of a herd of horses all doing the same thing. It also puts me on equal terms with the other participants.”

In the bush, branches can be hazardous, however a few warning calls from the group mitigate the risk of being hit in the face.

Dick encourages anyone thinking about horse riding to give it a go, and any horse riders losing their sight to not give up on the things you enjoy the hobbies and interests you treasure.

“It takes a bit longer to work it out but with patience you’ll regain the pleasure.”

Chumley, his horse, has been with him for 12 years. He has developed a great bond and sense of connection with him over that time and he has written a poem about it.

On a loose rein.

In the knackers hands were the also-rans, young, skinny, beaten and broke,
Helping them loading with quiet goading was a wiley old horse dealer bloke.

Hang on mate, he said, open that gate and cut out that white sox bay,
his head’s on right and he’s not up tight and I think I can make him pay.

I’ve got you a horse he’s a cracker of course. You better come over and try him,
Chum was his name on the hills he was game and I decided to buy him.

First trek down the coast two hundred K’s at the most he showed he had heart and ability,
In the rough he is bold stays cool and I’m told he strives it with clever agility.

With his head held low he seems to know to watch where he’s putting his hooves,
and on a loose rein he uses his brain to follow or make his own moves.

At a puddle not deep or muddy wet seep where others splashed through as they found it
He’s very keen to keep his sox clean and jumps over or works his way round it.

His long forging stride is not a smooth ride but he’ll walk at this pace to the last,
And if you’re behind him and weaving you find him call out if you want to come past.

He’s a standard breed of the pacing creed and I tell why he‘s not on the track,
He’ll stay in the hunt if his head’s in front but if not he’ll drop off the back.

On Mahia beach where the long sandy reach stretched out ahead like the turf,
He was off at a pace and keen for a race were we cooled down in the surf.

I’m winning with training but when we’re loose reining he’ll find a low tree to walk under,
With no warning call I’m avoiding a fall spitting out bark and cursing asunder.

In the yard he’s a gent no nasty intent and nothing he’ll ever pull back from,
But sideways he’ll creep and silent he’ll keep just as I’m throwing his tack on.

I give him no thanks for playing these pranks and I get the strongest impression,
He thinks it’s funny to rib the blind bunny just look at his laughing expression.

But his antics aside he’s a pleasure to ride and there’s one thing for sure in the dust,
when on a rough trail and it’s tempting to bail I gotta have confidence and trust.

So I rely on this hack and the gear on his back and what’s more between us than leather,
This horse and his eyes and thanks to you guys we can trek the back-country together.

If you would like support to continue doing the hobbies and interests that you love with vision loss – we can help. Get in touch by calling 0800 23 33 33 or email info@blindfoundation.org.nz