Josh Davies, 22, is a comedian performing at the Fringe Festival happening in Wellington in March. His show ‘Look! I’m Blind’ “embraces and celebrates the funny side of disability”. We talk to Josh about his show and his comedy career.

What were your motivations behind getting into comedy?

I got into performing because I really liked watching comedy. I always admired how people would take their flaws or their perceived flaws and turn it into something a room full of strangers could identify with and revel in. Then my first few gigs went well enough for me to continue and try and turn it into a career.

Why did you want to write a show about growing up blind?

I have very little else going for me. Everyone has a unique selling point and for me that is my vision. I have x-linked Retinoschisis. So I am totally blind in my left eye and I have 6/38 visual acuity in my right, as well as a couple other things that make it slightly worse.

There aren’t many disabled voices in entertainment let alone stand-up comedy, so it’s much easier to find something to talk about if there aren’t 50 other great creators also talking about it. This also means there is a huge part of our communities whose everyday life isn’t represented in popular entertainment, so it’s a lovely feeling to be able to fill that niche.

Your show ‘embraces and celebrates the funny side of disability’ – how do you do this without causing offense? Is it a fine line at times?

I think intent and not talking down to people is a big part of it. I spent last week volunteering as a young leader on the Blind Foundation’s kids camp and there were blind jokes flying everywhere. Since everyone knows it’s coming from a place of goodwill and embracing our collective flaws, whether that is our eyes or our personalities or our inability to resist a block of chocolate. (In the time it’s taken me to answer these questions I have ripped through a block of chocolate.)

It can definitely be a fine line given that everyone has their own view on what is offensive and what isn’t. I just try not to be cruel to people, that’s usually enough.

The fact I am visually impaired myself helps. It gives the jokes context, it takes me from an able-bodied guy making jokes about blind people to a wonky guy making fun of the fact he walks into things sometimes. 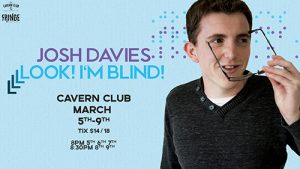 What do you hope people take away from your show?

A glowing recommendation for the friends and family. This is how I pay rent. I just hope everyone regardless of who they are laughs a lot and has a good time; it is a comedy show after all. First and foremost it will be funny, any emotional weight or insight into the world of disability is icing on the comedy cake. That being said, I also have plans for a secret legion of differently abled soldiers to help me with world domination.

How has the Blind Foundation supported you in your comedy career?

I think the biggest impact the Blind Foundation has had on my comedy career was before I even started comedy. Through people like Meredith, my old resource teacher, and a bunch of other staff members, my perception of vision and living with low vision was shaped in a way that enables me to make it funny. A thing I do find very useful is the financial aspect of the Total Mobility card, which I didn’t know existed when I moved to Auckland. When I was talking to someone at the Blind Foundation about how paying for buses everyday was straining my wallet they told me about it. It’s a small discount but over time it adds up. Knowing there is a support network there if and when you need it takes away a lot of unnecessary anxiety.

What advice would you give to someone reading this that might be thinking about getting into comedy?

Please don’t. I’m not clever enough to compete with a smarter, funnier blind person. And there is only room for one!!!

Genuinely, I think the best advice is to write jokes beforehand. It’s surprising how many newbies don’t do that. It just makes it a lot more enjoyable for you and the audience. Also don’t expect to be good straight away – like anything – it takes hard work and time.