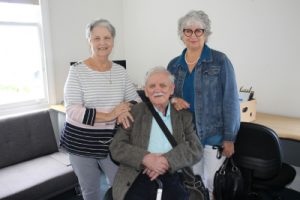 About 15 Blind Low Vision NZ clients had a special opportunity recently to say goodbye to the boarding house that was a big part of their childhood.

Nathan House opened in 1946 as a dedicated house for boys attending the adjacent school for the blind onsite in Parnell, Auckland.

The house will be demolished as part of a project to develop a premium retirement village, a joint venture between Blind Low Vision NZ and the Generus Living Group. Described as a ‘once in a generation’ opportunity, the project will provide sustainable revenue for Blind Low Vision NZ, enabling it to deliver client services such as personalised vision rehabilitation well into the future.

With mainstream schools not allowing blind children to attend in the 1940s and 50s, the people on the tour had some mixed emotions.

“Some children were just dumped here and didn’t see their parents very much, if at all, and like every school, there were good and bad teachers,” says John Puhara who lived in Nathan House for 9 years.

“What it did teach you, living there, was how to be clean and tidy and look after yourself, which back then, broke the mould of what people thought a blind person could be.”

“I made lifelong friends living there, and they really encouraged blind sports.”

Also taking part in the tour was Shaun Johnson, 76, with his sisters Maureen and Liz. As a family, they lived in the house for nine years with their father being the housemaster.

Shaun learnt to play the piano at the school when he was 7-years old.

“Music classes were compulsory and if you were good at it then you carried on. I was a member of the brass band and two people who got me up to scratch were May Bray and Lilian Martin.”

This would go on to spark a lifelong career playing piano and it is likely you can find Shaun at the James Cook Hotel in Wellington where he has held a residency there for 40 years.

Touring the house brought back many memories for the family. Shaun was quite keen to see if the alcohol he and his friends stashed was still in its hiding hole (it wasn’t). Maureen’s first boyfriend lived in Nathan House and their mother taught others how to cook a roast in the oven.

Those on tour shared special memories with each other reminiscing about their childhood – the good times and the challenging– thankful for the chance to say goodbye to a building with a lot of significance to them.