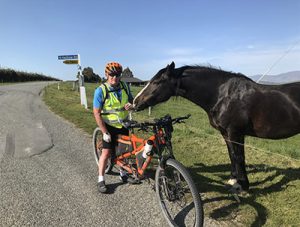 It’s likely that Paul Glass, 63, will be the first person who is blind to attempt the Tour Aoteoroa – a 3000km cycle tour from Cape Reinga to the Bluff, in February 2020.

“The organisers have never heard of anyone who is blind doing it and chatting to people at Blind & Low Vision NZ, they haven’t heard of anyone doing it either, so it’s a good feeling to hopefully challenge some people’s attitudes on what a blind person can do.”

He’s signed up to complete the tour and will be cycling with his tandem biking captain Russell Shanks.

A keen cyclist before developing retina pigmentosa and glaucoma, Paul wanted to continue doing something that he loved.

“I love getting outside and meeting new people. It’s a good life, and I enjoy it.”

Through Blind & Low Vision NZ, he got into tandem biking and was introduced to Russell, an athlete keen to volunteer and cycle with someone.

The pair have been riding together for the past three years and going for long rides. The training has ramped up ahead of  the tour.

“We did 400ks last weekend. The tour is going to be tough, with lots of hills and challenging terrain – areas like the central North Island are going to be hard going.”

He says people are often surprised to learn that someone who is blind is undertaking such a challenge.

“I’ve had lots of remarks, lots of comments, but the thing is, I don’t really consider myself disabled – I just can’t see.”

He doesn’t think attempting the tour is anything extrordinary – he says it “has got to be done, and it’s just something we want to do.”

And he and Russell are not stopping there, after the tour, they plan to complete a cycling trip in Australia from Perth to Sydney.

To help with the expenses of the cycle tour, Bryan Prestidge, who supports the team has set up a fundraising page and if they raise over $11,000 then the reminder of the donations will go to Blind & Low Vision NZ Guide Dogs.

If you’re a Blind & Low Vision NZ client and would like to get into tandem biking or pursue other recreational passions, get in touch. Call us on 0800 24 33 33 or email info@blindlowvision.org.nz