Melody Jade Steyn from Tauranga wishes she received help earlier to use a white cane. 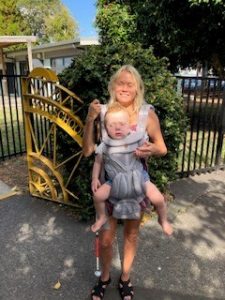 A mother of two young boys, orientation and mobility training was low down the to-do list, as looking after them was her top priority.

However the increased independence that she feels now has helped her mentally and she says it makes losing her sight slightly easier to deal with.

Melody has had Diabetes since childhood. She is completely blind and glaucoma has caused failure of the optic nerves.

When she first began training, her confidence was low, not wanting to go beyond the letterbox or past taking the bins out.

“I started learning when my second son was only a few months old, so it was difficult to plan training around his sleep schedule.

“Most days I was knackered having to deal with a new baby, lack of sleep and breastfeeding.”

Motivated by the goal of getting her oldest son to school safely, she persevered with her Blind Low Vision NZ rehabilitation instructor Michael Shaw.

Getting the school route right was not smooth sailing.

“I had a lot of moments during training where I thought I would never be able to get the route right. Sometimes practicing on my own, I would mistake a driveway for

the path or miss a lamppost or landmark and think it was impossible.” 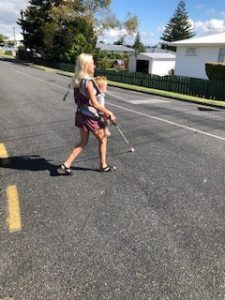 Michael reassured her that he would be there practicing with her for as long as it took – even if it took a week, a month or a year.

Her perseverance paid off. Being able to drop off and pick up her son at school was huge for her and it came with an added benefit of making a friend with another mother.

“Melody is an inspiration to me and all of us that work in the Tauranga office. She embodies the phrase carpe diem (seize the day). She has an amazing self-deprecating sense of humour and she has the patience of a saint,” says Michael, her vision rehabilitation instructor.

Melody urges anyone who is thinking about white cane training, not to put it off.

“Don’t put it off! I put it off for a long time, and the longer I put it off, the harder it became to ask for training and help.”

If you’re a Blind Low Vision NZ client and would like support with white cane training, get in touch info@blindlowvision.org.nz or call 0800 24 33 33.